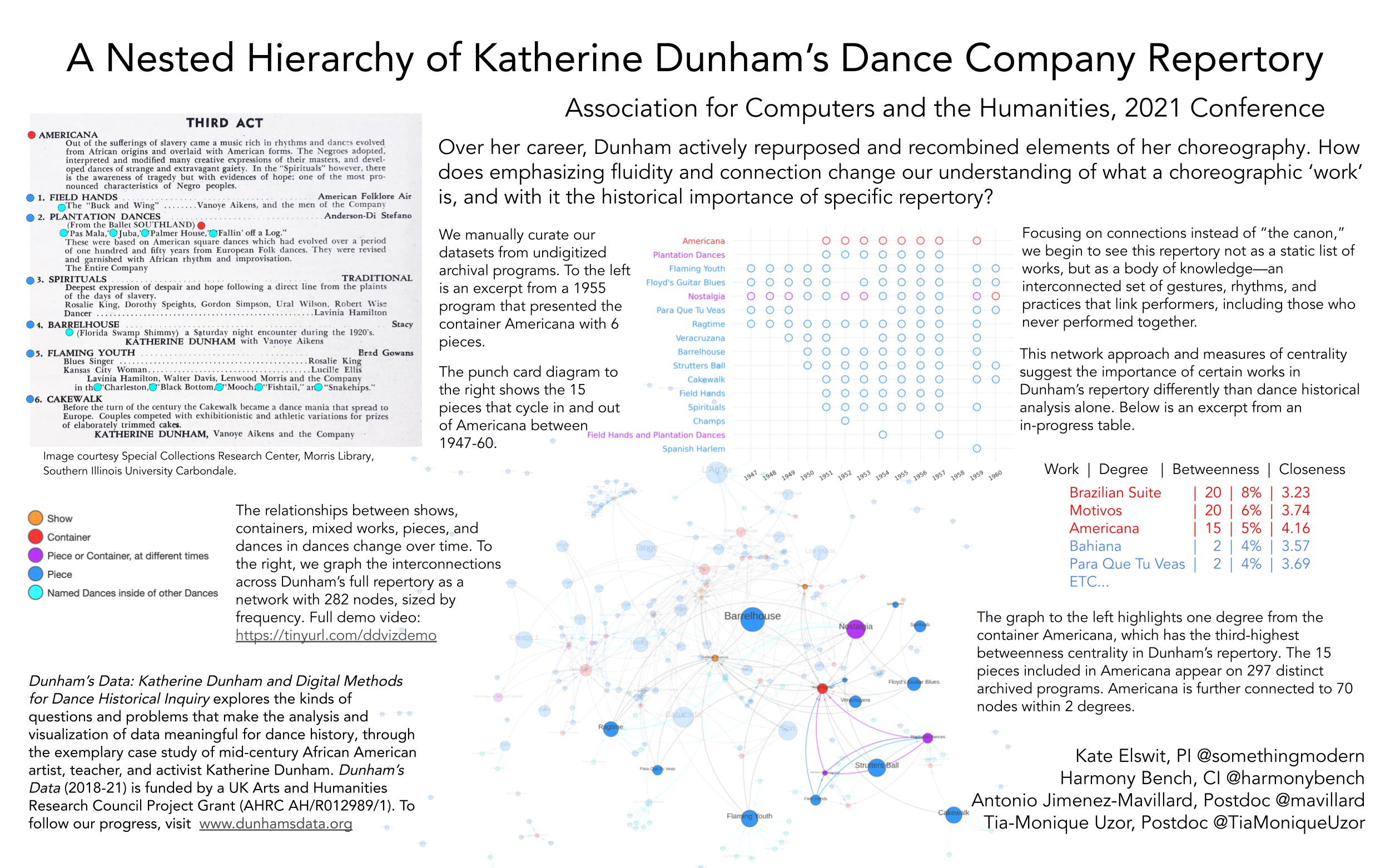 The four of us (Kate, Harmony, Antonio, and Tia-Monique) are excited to share this poster at the 2021 Association for Computers and the Humanities (ACH) conference.

Over the course of her career, Katherine Dunham actively repurposed and recombined elements of her choreography. As we began to manually curate datasets from undigitized programs, we structured Dunham’s repertory of nearly 300 entities into a nested hierarchy of named evening-length shows, act-length containers, pieces, and named social dances-in-dances, which we then graph in order to track their shifting relationships over time. These interconnections trouble the choreographic ‘work’ as a static category and suggest other approaches to analyzing dance. Seen through the lenses of frequency of performance, durability over time, and the way repertory connects its performers, we further offer another way to evaluate the importance of specific repertory.

This poster summarizes these ideas using Dunham’s Americana as an example. Americana is what we call a container, which means it has constituting elements, but we find that these elements are not consistent across the years. In the upper left hand corner is a sample program from a 1955 show in which Americana encompasses the 6 pieces “Field Hands,” “Plantation Dances,” “Spirituals,” “Barrelhouse,” “Flaming Youth,” and “Cakewalk.”

But in the upper center punch card diagram, which represents data drawn from 52 archival programs containing Americana, we show how a total of 15 pieces cycled in and out of Americana from 1947 to 1960--the current reach of our Repertory dataset.  Even though its contents changed, Dunham saw Americana as a coherent entity. Responding to fan mail about its inclusion in the 1962 production of Bamboche, Dunham wrote: “I personally have always had great affection for [Americana], and for that reason there couldn’t really be any Katherine Dunham show without it” (letter; 31 August 1962).

In addition, the 15 pieces associated with Americana appear on 297 archived programs, including as part of other containers. An overview of our interactive repertory network graph on the lower center show how Americana is interconnected across this nested hierarchy, expanding from 15 nodes at one degree to 70 nodes at two degrees (demo video).

Finally, on the far right, we include a few lines from a table that analyzes the centrality of the 292 entities in our Repertory Dataset, in which Americana has the third-highest degree and betweenness centrality for the period from 1947-60, behind Brazilian Suite and Motivos. Dance scholars engaged in traditional historical analysis might emphasize Americana’s most famous pieces, such as “Barrelhouse” or “Flaming Youth,” and consider Dunham’s performance and critical reception, her approaches to onstage representation, or her compositional choices. An analysis of connectedness points toward different ways for repertory to be understood, including how often a work was performed, how many people performed in its cast, and what repertory appeared alongside each other in different programs. From this historical network perspective, Dunham’s repertory emerges as a body of knowledge — an interconnected set of gestures, rhythms, and practices that link performers, including those who may never have performed together at the same time.

We’re so excited to have this small preview of this work in the world. The full Repertory Dataset will eventually be available from our Dunham’s Data series at the National Archive of Data on Arts and Culture, and further discussion of this perspective for dance history is forthcoming in Harmony Bench and Kate Elswit “Visceral Data for Dance Histories: Katherine Dunham’s People, Places, and Pieces, 1947-60” TDR 66.1.