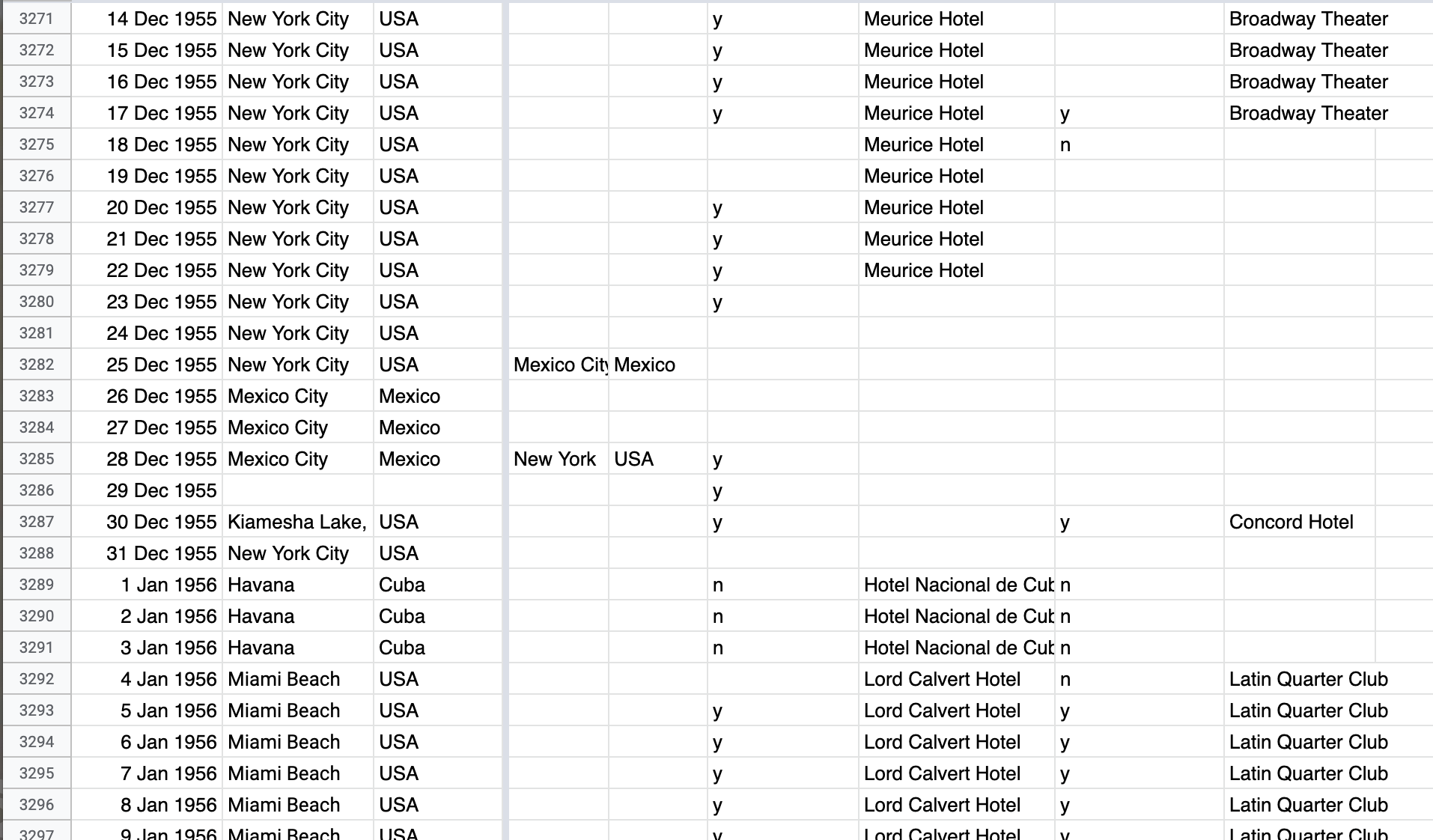 One of the questions we hear a lot when we describe the daily itinerary dataset we’re building is “That takes a ton of work! Is it really worth it?” We’d like to share an example of why this work is important, not only for our specific project, but for dance studies as a field. Recently, we received an email request for information from Elizabeth Schwall, who knew that we’ve been combing through archives to document the three decades of Dunham’s most extensive touring. We are planning to publish the itinerary so that everyone can access the information, but it’s still a work in progress. We started with every day between 1950-53 (for which we have confirmed information for 93% of the days), and are currently expanding to 1947-60. Of 1947-60, we are relatively solid on 1949-60, and are finishing up 1947-48. After that, we’ll go through everything again for a data audit, and then begin to build out earlier dates.

Elizabeth wrote us: “In one of my book chapters, I discuss Dunham's connections to Cuba. [...] would you be willing to share or corroborate when she was in Cuba from 1946-1955? I hypothesize she was there at least once before 1947 and early 1955. There's another book that claims she was there in 1953, which I'd love to corroborate. I'm writing about Cuban dancers who ended up in her company, and knowing the timing of her visits would be so helpful. Unfortunately, no documents I encountered helped establish when she went the first time and the timing of subsequent trips besides one in January 1955.”

Based on what we have so far, this is our answer to Elizabeth’s question:

Doing this consultation for Elizabeth tied into some things we have been thinking about lately:

First, Dunham’s trips to Cuba were personal -- although she tried to make a performance work in this period, it never happened. This does not, however, mean that she didn’t experience Havana or build meaningful connections there. This is why we argue that a more granular, “everyday” historical perspective — instead of a few exceptional performances in a few exceptional cities — can help us to think about dance history differently.

Second, Elizabeth is building an argument around Cuban dancers who wind up performing with Dunham. From other datasets we are building, we know that some of Dunham’s first non-US performers are Cuban, and we count at least 13 Cuban performers working with her between 1947-60. In our own work, we are thinking about the ways in which digital methods can help us to make visible the ephemeral practices by which knowledge of dance gestures and rhythms is transmitted and circulated.

And finally, these datasets are not only a research tool, but also a research output. Not simply transcribed from a single authoritative pre-existing analog document, these datasets instead depend on a deep engagement with the archival materials to reconcile multiple, partial and often contradictory references. The rigorous, original research that we have done to construct them can meaningfully support and extend not only our scholarly arguments but those of other scholars. Citation practices are a part of the legibility of such research. We are currently working to publish these datasets so that they can be referenced in bibliographies just like any other work of scholarship.